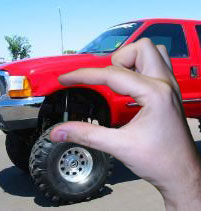 A survey in Car & Truck Magazine says the larger the truck lift, the smaller the penis.
Related Topics

HOUSTON, TX – A recent survey by Car & Truck magazine concluded that there exists an indirect relation between the lift in a truck and the size of the owner’s penis – meaning that as the size of the lift increases, the penis size decreases. Although the relationship had been previously speculated by much of the American population, the survey marks the first documented evidence of the correlation.

Despite some truck owners taking exception to the report, Car & Truck Editor “Big” Ralph Hendrickson stands by the survey.

“Look, I ain’t exactly happy about it either,” said Hendrickson. “I mean, I have some big lift on my truck. But we took a damn serious approach to this here topic and we found that all them rumors and psychology is true. Fact is, if you have a lot of lift on your truck, you either have a small Johnson or you are havin’ some repressed homosexual desires. Or if you are a woman, you’re likely to have some serious penis envy.”

“When we first started receiving measurements, a gal on the staff here said that the numbers comin’ in for penis sizes couldn’t be right,” said Hendrickson. “We were getting numbers in the double digits. So I went and asked a research assistant at the local community college and they told me that when dealing with penis size reported by men, there was some 40 percent lie. So when we applied the formula that he’d gave to me to the sizes on our sheets, we began to see a lot more better of measurements.”

The survey, which will appear in the November issue of Car & Truck is already being disputed.

“That is bullshit. BULLSHIT,” said 18 inch lift owner Mark Trainer. “Just ‘cus I put a lift on my truck doesn’t mean my cock is small. Look, I’ve asked every woman I’ve been with and they all said I was huge. That I was the biggest that they’ve ever been with. Now are you saying that all them chicks are lying?”

According to the survey, Trainer’s penis measured a petite 4 and one-half inches.

“Yeah, that was pretty funny,” Hendrickson said. “This jackass came in talking all big, and he actually put his name down on the paper. This was a blind survey. We probably should have erased his name, but our office girl thought it was funny ‘cus he was rubbin’ his nub as he was tryin’ to hit on her.”

While the results have hit the truck driving world pretty hard, most of the general public sees the relativity of the results.

“I knew it,” said Tracy Doughty of Phoenix, AZ. “I’ve been with a few guys who had big trucks, and they were all small. But that would have been fine, but they had no idea how to use them either. Now, I’m with a guy that drives a Saturn and, Oh My God, he’s hung like a fucking donkey. A donkey that has an abnormally large penis, even when compared to other donkeys.”

This article is ridiculous. I build cars for a living and have a very nice Mercedes sedan as well as an older Ford F-150 that’s on 35” tires and has a 9” lift. I drive the truck in town mostly because 1)I tend to drive slower in it and 2) There’s a SIGNIFICANT reduction in people cutting me off, tailgating me, or refusing to allow me to change lanes. I’ve got a 7 year old daughter and she’s precious cargo. I’d rather pay for 10mpg than 23 mpg just to keep people off me than to have irresponsible drivers cut me off or tailgate me because they’re jerks. I can assure you, when you’re driving a huge truck with a drop down trailer hitch, you don’t have the little boys in their little cars trying to push you out of their way. They move on to easier pickins’.

There’s no way to verify this scientifically, but I have a theory that the louder the motorcycle, and the more it is revved just to make noise, the smaller the male’s penis is.

Those with a really small penis drive a giant F350 towing a trailer full of dirt bikes and have a pack of Marlboro’s in the sleeve of their AC DC World Tour ’89 T-shirt. Can’t forget the marbles in the sock hanging from the trailer hitch when the dirt bikes or ski boat is not in tow or the Pit Bull hanging his head out of the window.

Yep, over compensation vehicles for their ‘small’ members. My sister always jokes that she and he friends would never date any big pick up driving guys—little dicks and all.

I don’t think it’s all true, like any study you’ll have the few that over come the rest. I drive a Dodge ram with a decent 5” lift, and I have a girlfriend going on 11 months now talking marriage and she’s happy with my 7 ½” long 4” thick manhood. Average size study in the US of white males is 4½”-5”. No I’m not 10”, lol but God gave me good goods and a great truck to drive it around in. But I’m sure there are guys who drive lifted and are small and questioning their sexual orientation, yeah I’ve met some of them too. Thanks for reading.

Overcompensating for a physical short-coming AND trying to reinforce a false dichotomy regarding their confused sexuality. They could just be honest with their friends and women in their lives…proclaim they’re gay and have small dicks.

Personally, I came to this conclusion in the ‘90’s when working for a masochist A-hole. He spoke of two things outside of work issues; his (lifted) truck & his (imagined, I’m certain) sexual prowess. You all need to realize that the survey never says there aren’t exceptions! I think a lot of you guys protest too much! This only serves magnify your insecurities & shrink perception of what your packing!! Use it well & shortcomings don’t matter!

I’m a straight male so I’m not thinking about d!ck sizes, but I can’t help but notice how many 5’7” 145lb guys drive 1-ton lifted pickups.

Hahaha this is great… lift kits and big tires = small dicks.
The axle height is what need to change for offroading…