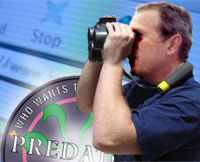 NEW YORK, NY – In hopes of capitalizing on a new and rapidly growing market, NBC Television has announced plans to combine one of its most popular shows, “To Catch a Predator,” with a reality competition format to create what NBC executives are calling “the greatest reality show of all time.” The new show “Who Wants to Be An Internet Predator?” will premier this fall.

“(‘Who Wants to Be An Internet Predator’) has the distinct possibility of being an instant hit. Seriously. This is going to be the greatest thing to hit TV since the moon landing. No, since the premier of ‘The Singing Bee,’” said NBCs Director of Programming Neil Heiskel. “This show is going to have everything. It will be outrageous and heartwarming at the same time and if it doesn’t win every single Emmy… well, I already know it will because between you and me, that award is totally fixed. Nowadays, it only costs $500,000 for a nomination and $1.1 million for a win.”

“Who Wants to Be An Internet Predator?” is being billed as a mixture of several successful reality shows with a little bit of child exploitation thrown in to “spice things up.”

The show itself will feature 12 contestants from all over the country as they take part in 15 weekly competitions to see who has what it takes to become an internet predator.

“Think of it like American Idol with pedophiles,” Heiskel said. “But that’s not all this show is. There’s an aspect of the ‘Amazing Race’ thrown in when our contestants have to do various tasks in different cities. Mix that with ‘Temptation Island’ and a little bit of ‘The Girls Next Door,’ and you got yourself one compelling little show. To be honest, the emotion that these guys show on an episode by episode basis is astounding. I mean who would have thought that these sick fucks actually had feelings? I didn’t. But it’s there.”

The first episode will feature all contestants sending cryptic messages in an online chat room. The first person to send the “child” a picture of their penis will win the competition. Future episodes will feature contests that include a scavenger hunt to find the address of a child home alone and a sexual innuendo competition.

Child protection groups across the country are split on the show with some calling for its immediate cancellation and others applauding NBC’s decision to shed light on a growing issue.

“The fact that a network would take the time to show how great love between a young child and a full grown man can be is just… well, it brings tears to my eyes,” said Pedophiles In America President Karl Hernandez. “We still have a little ways to go though because to my understanding, they are only featuring men and little girls. While the show is a step in the right direction, we need to make sure that all forms of child-man love are shown in all their beauty. I mean, we don’t all just want to have sex with 12-year-old girls. That’s… that would just be wrong.”

Those that oppose the show are arguing that “Who Wants to Be An Internet Predator?” will glorify and normalize child abuse and sexual perversion.

“When you think you have seen as low as American TV can go, you see something like this,” said Cathy Franklin, 37, a New York resident and mother of three. “To be honest, I thought ‘Are You Smarter Than A 5th Grader’ was the bottom of the barrel. I guess I was wrong. The sad thing is, I’ll probably watch it. Why? Because what the hell else am I going to do? Spend time with my kids to teach them how to handle themselves in an internet predator situation? No. TV can do that.”

“Who Wants to Be An Internet Predator” will air on Thursday nights later this Fall on NBC.